Eleven huge gingerbreads by international artist Marek Schovánek are newly decorating the Kotva department store. Specially adapted gingerbread dough sculptures, each measuring 3.1 m and weighing 100 kg, invite  to the exhibition of The Anarchist Cookie Shop, which has transformed part of the third floor of the Kotva into an anarchist cafe. At the exhibition, Schovánek uses fragile biscuits to display universally understandable symbols of violence, ideology and art, which he puts into new context to point out dysfunctional places in the structure of society's arrangement. The cafe will be fully operational in the presence of Marek Schovánek 3., 10 and 17 December. Admission to the exhibition, which runs until January 6, 2018, is free.

The exhibition in the Kotva is based on the  artistic cookbook The Anarchist Cookiebook, which is a parody of William Powell's well-known guide book The Anarchist Cookbook. Part of the third floor of the Kotva will be occupied by parts of baked biscuits. In an example of brittle, sweet biscuits that depict the motifs of interpersonal violence, indifference and suffering, Marek Schovánek draws the contrasts of today's world, where on the one hand there are consumerist and consumer paradises that the "poorer" rest of the world craves on the other. The concept of The Anarchist Cookie Shop doesn't just work with the divisiveness of the world in general, it also ironizes the world of art and the art market itself. This is by straying from established approaches to exhibiting and turning part of the exhibition into a cafe and confectioner's. In there, visitors can even refresh themselves with fresh biscuits that otherwise hang on the walls as art. It creates such a parody of parody or, indeed, self-parody. This can be enjoyed in a conspiratorial spirit by both sides, both artist and visitors.

The concept was first implemented by Marek Schovánek in 2012 at the ART STAYS International Festival of Contemporary Art in Slovenia, where it attracted over 4,000 visitors and had great audience and media acclaim. It was named one of the most interesting projects of the European Capital of Culture 2012 festival. A sequel to the exhibition then took place in 2015 at the Dancing House Gallery. The Anarchist Cookie Shop exhibition at the Kotva is a loose follow-up to previous exhibitions. 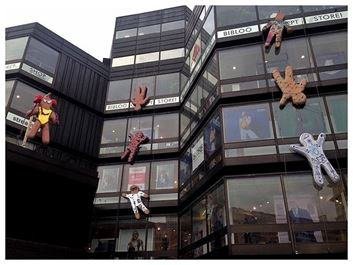